One super short outing fished one run before I was summoned home to sort child problems out, but it went well in a short slow clear run (lets hope it stays like that to )  seven grayling and two small trout, shame it all ended to soon.

Quick hour down the river, I must admit when I went out the house first thing this morning it was misty and really cold so I waited for the sun to come out before heading out, there was the odd fish rising but nothing dramatic so I thought I would try Trio, so on with a sliding stimi and two small bead head nymphs, the first area I tried was a slower, deeper bend in the river after a couple of cast and small trout had taken the point fly, then as I moved up the run around four feet something came up and smashed the stimi  another trout  I always find it quite funny when fish take such a large  dry fly when there is nothing bigger than a tiny gnat to be seen in the air or on the water, as I slowly moved up the pool fish kept coming and now the grayling had woken up, by the time I had fished around twenty yards up the run I think I had caught around eight grayling and three trout.

That Time Of Year Again

Well it’s that time of year again, time to start chasing the ladies without getting in trouble with you other half, I’ve been out  a few times this week for a fish on my own and the rivers are fishing very well indeed with good numbers of grayling and a few out of season brown trout being caught, lets hope the weather plays the game this winter and the rivers stay fishable.

So please get in touch if you want any help with finding that grayling of a life time.

Well at long last I managed a day of fishing for myself, as I  have seen quite a lot of my local rivers I thought I would go  further a field so off I went to have a look at the upper Wye, the river was looking lovely but with little surface activity, so French leader on with three 3mm bead head nymphs, the run I fished had quite a lot of overhanging trees so a little caution was required to my surprise third cast a small trout,  a handful more casts a rather nice trout but not what I wanted to catch, then another and another I was starting to get a little disheartened with all the trout, if it had been the middle of the trout season it would of been fantastic, so I kept plugging away and finally a small grayling taking the middle dropper a olive nymph,  as I moved down the run a little further the braid indicator paused and yes I had something a little larger on and it’s a grayling in the fast water it gave a good account of it’s self which was brilliant for me after seeing so many clients playing and landing fish it was my turn for the heart rate to increase.

As the day went on I had a good mix of trout and grayling, the grayling weren’t the largest fish I’ve seen but in lovely condition and not bad for my first outing, the one surprise I did have was there was a lovely looking run under a overhanging tree as the nymphs swung under the branches the indicator stopped and all hell broke loose a huge browny going nuts, I thought I felt the hook pull but the fish was still on and then bang it had gone, I think the hook did pull then the point fly might of foul hooked him then he broke that fly off, lovey fish but out of season so I wouldn’t mind bumping into him next year. 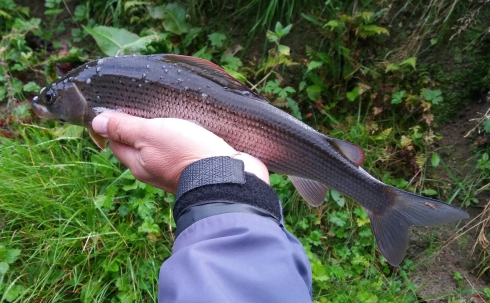 Another day on the rivers of Wales the high water has gone and now we have next to no water, as has been said before were never happy are we the main thing is lovely sunshine hatching insects and loads of fish, the river is 1cm from being the lowest it’s been on the EA’s web site gauge, so the river is really low and super clear so presentation is key, fishing at a little more range super fine tippet and of course good casting, the set up is going to be trio  dwo/ldo klink and two size 18 nymphs and 3lb tippet which worked exceptionally well for Drew with a mix of 15 trout and grayling coming to the net a few low impact catch and releases ( came off ) as well.

Well to day started off a little on the chilly side, minus one with a bit of breeze blowing so what the actual temp was I have no idea, but it was safe to say it was cold.

Today I was showing Tony winter nymphing techniques, Tony told me how he was struggling with longer rods and when fishing weighted nymphs how they keep snaging the bottom all the time, as the river had now dropped to a summer level I thought we would use a French setup with a sliding braid indicator and three nymphs, showing Tony how to fish this technique by tossing the nymphs approx. forty five degrees up stream and keeping the nymphs moving at the pace of the water to give them good presentation and if the nymphs snagged the bottom how to help them through there drift by slightly leading them, which helps to stop the snagging every cast, so after a quick demo it was over to Tony ( I have taken Tony out fishing many times and he is a good fisherman and quick learner )his casting was spot on and the drift through was working well and with the slight leading of the flies Tony notices straight away the lack of snags/false bites from the bottom but after around ten minutes he did have a bite and not of a snag a lovely looking grayling which stayed on for around ten seconds and then it came off, but shortly afterward Tony was into another fish this time it stayed on and a nice fish around 2 lbs, then another this time a out of season brown trout and with in ten casts another trout, for a rather cold windy day Tony was having quite a good day I think six fish landed and two fish lost.

What Tony Thought Of His Lesson.

Had a great coaching session today on nymphing with a long French leader. Whilst I’ve fly fished for many years, Andrew has always been able to help me to both brush up my fishing techniques and learn new ones with his patience and good humour. I wouldn’t hesitate to recommend Andrew’s services to a newcomer to fly fishing or the more experienced angler who would like to improve their skills. Tony 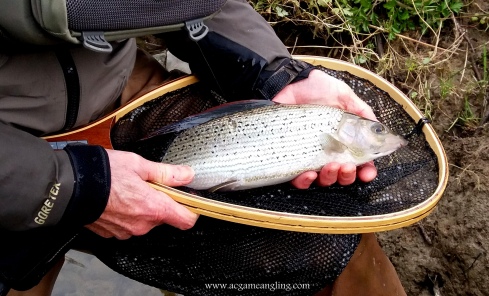 Perhaps Not This Season

Well the rain is back, non stop yesterday and still raining this morning, so the river is out again so I don’t think I will be finding a fish like the one above any time soon, the river has been fishable for four days in three months and just started to look good and then blown out again, must stop complaining and find something to do while I wait to go fishing again.

Weather Still Not Playing The Game

Really wish the weather would settle down so I can get out and wet a line, all the rivers in the country seem to be blown out.

Hopefully things will calm down and I can go hunting a few ladies of the stream like the one above.

That Time Of Year 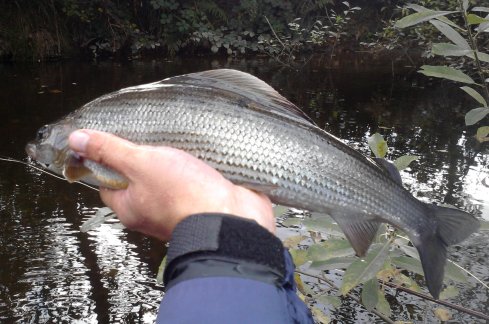 Popped out for a morning looking for grayling or so I thought, started of bright and still quite a nice day for October, as the river is so low and clear I thought I would go with trio on quite fine tippet of around 3lb and two size 16 nymphs, after around 10 minutes and nice little trout came to hand, not what I was looking for but a fish, as I worked my way up the run the grayling started to come and a few nice fish.

After around an hour the wind started to get up and it was amazing how the leaves were just clinging on to the trees the wind was just enough to dislodge them and down they came on mass, now usually after one hour of my own fishing and this happened I wouldn’t be happy, catching leaf after leaf, tried a dry and half the time it would be sitting on top of a leaf, but after the last couple of weeks visiting my farther in ICU having your fishing spoiled doesn’t seem that important, mind this week he is talking a little so I’m a lot happier and there will plenty of other fishing days.

A Big Thank You To Big Scrim

A very big thank you to Tony for a very special day on the Dee, the forecast was very poor after the last week of lovely sunshine, but to be fair it wasn’t as bad as they said a little rain and strong winds, the first run looked amazing for nymphs but to both our surprises next to nothing, I had two touches and one fish on and almost straight back off, the run was quite fast and the odd fish rising here and there, so  as they say “I went back to the beginning” the odd blue winged olive fluttered in the air but as the water was so fast and broken I thought a small bwo pattern would keep sinking to quickly, so I tried a size 16 sedge pattern and bingo straight away a nice grayling, couple of cast and another and another if you spotted a rise in the fast water and placed the sedge three or four foot above it you were into a fish, quite amazing how you could run three nymphs through the run and next to nothing the fish only had eyes for the surface.

Things seemed a little quieter so time for a move, this time a long quite shallow glide with the odd fish moving, I still had the sedge on so why not try it again and the same result but still all grayling and no trout, it still kept going through my head that there should be some big fish sitting deeper in  the pools, so back to nymphs and see what I could do and to be honest not a lot three trout and nothing of size, try as I might the only way today was on the top, not a bad way to spend a day mainly fishing dries in October. 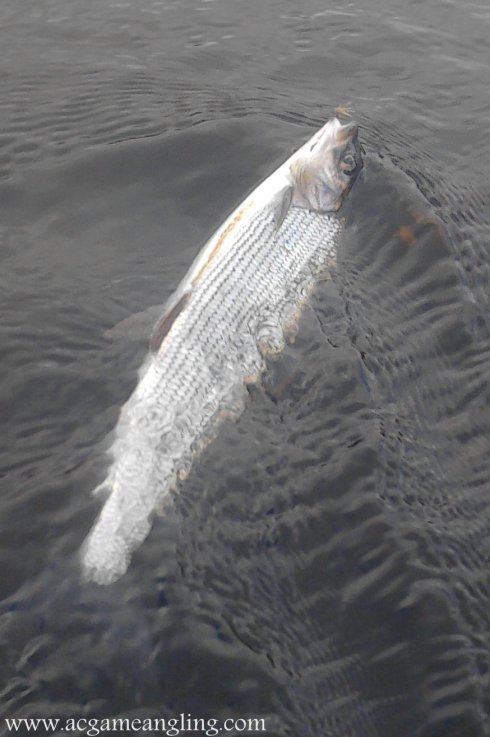